The ancients made medical use of silver based on their intuition rather than knowledge. Silver plates were widely used in Egypt to cover wounds for quicker healing. It was not uncommon for distinguished Roman legionaries to wear breast and elbow pieces made of silver plates, which prevented infection of new wounds.

Cyrus of Persia used silver vessels to carry water during military campaigns and it wasn’t merely to show off. In fact, it was well-known at the time that storing water in a silver container helps to keep it fresh. The reason is that tiny silver particles, namely Ag+ ions, soon become part of the solution, killing bacteria and other microorganisms.

When Alexander the Great invaded India, his troops suffered a gastrointestinal epidemic. However, the disease only affected common soldiers, who had been eating and drinking from tin, while sparing their silver-using commanders. The precious containers proved to be pretty powerful disinfectants.

Medieval Europeans would drink from silver vessels to protect themselves from the plague as well as cholera. Assyrians associated silver with the Moon. Priest of ancient cults and later alchemists maintained the association. This brought about a curious cause and effect chain. According to a common belief, it was the goddess of the moon who inflicted madness on people; hence the word “lunatic” (“luna” being the Latin for “moon”). Silver was thus regarded as a cure for mental illnesses. Paracelsus, who pioneered the Medical Renaissance of the 16th century, suggested the so-called moonstone, or lapis — technically silver nitrate — as a treatment for nervous disorders. Lapis (the Latin word for stone) was commonly known as infernal stone since it was used for cauterization (that is, burning of tissues in the human body to close off a wound). Quite surprisingly, caustic pencils made of silver nitrate can still be found in drugstores nowadays.

The use of silver in modern medicine is credited to physician Carl Benno Credé (late 19th century), who was the first to report a promising outcome of using silver ions against sepsis. Credé provided evidence that it took silver three days to kill Corynebacterium diphtheriae, two days to defeat Staphylococcus, and only 18 hours to expel typhoidal Salmonella. He was also the first to use powdered silver nitrate and colloidal silver in an ointment for treating wounds and other skin conditions. Credé suggested that military doctors should use silver-coated gauze cloth in the field.

On top of that, silver was widely believed to keep vampires away. Unfortunately, few studies have been carried out so far, if any — vampires seem rather reluctant to contribute to scientific progress. While the anti-vampiric effects of silver remain somewhat underresearched, its antiseptic properties have long been studied and explained.

In a study using silver tracers, the labeled atoms were found to concentrate around inflammatory foci. How did they get there? Well, it turned out that white blood cells, whose primary function is to protect the body against disease, brought silver atoms to the infected spots in order to inactivate the pathogenic microorganisms’ enzymes. Why is it that silver, being poisonous to bacteria, does not affect metabolism in humans, animals, or plants? The answer is to do with dosage.

Just like other heavy metals, silver is toxic, although to a small extent. It basically proves the idea that no substance is poisonous per se. What is deadly in large amounts might activate a certain system of our body when taken sparingly, thus helping us fight off disease. While small doses of silver can extinguish infection, more considerable amounts of the metal might actually cause health problems such as argyria.

Traces of silver (about 0.02 mg/kg body weight) are found in all mammals. However, its biological role remains unclear. The brain has the greatest silver content of all human body parts, namely 0.03 mg per 1000 g fresh tissue, or 0.002 % w/w of brain ash. This seems to make a lot of sense as silver is highly conductive. Silver content is also relatively high in the eyes.

What is known and written about silver is way more than a short article can cover. Some statements are cited and recited a bit too often, and some seem to contradict each other (which is the usual thing on the web). It’s still a very interesting topic to explore, though. I wish scientists could finally find out the role that silver plays in our bodies.

My personal experience with silver has been very beneficial so far. I rarely suffer from seasonal “plagues” like the flu and recover in no time when they strike me. For those who don’t come in daily contact with silver, a simple uncoated spoon made of top-quality silver might be a good solution. Just put it in your jug or cup and enjoy the benefits of better water.

Thank you for reading this article. Feel free to ask your questions in the comments!

What you can read next 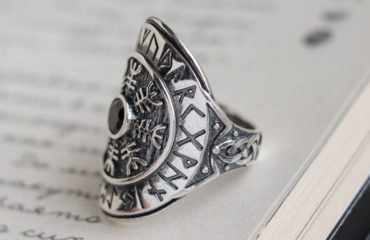 The Symbolic Jewelry of the Vikings: Wolves, Ravens, and the Hammer of Thor

Sign up and don't miss the latest news, updates and promos.